I’m not sure why I always refer to them as coffee cups, being a tea drinker myself I have never used them for coffee but, from what I have observed, we are a world of coffee lovers and we can’t wait to get a morning fix to help us through the day.

The requirement for any kind of drink to get us through the day has never seemed like too healthy a habit for me, but for some reason caffeine is the acceptable wonder drug and the people love it, not to mention the status of high flying business person that seems come with carrying a takeaway cup on the morning commute.

On the subject of high flying business people, the inspiration for this post has come after spending a morning in London, surrounded by plenty of busy business folk during their morning rush to the office.

I stood in a line a one of the many popular coffee shops watching drink after drink being prepared with speed as I moved surprisingly quickly to the front of the queue. I was asked what I wanted (“a cup of earl grey please”) and before I had time to even register that I was not going to be asked if it was to ‘eat in’ or ‘takeaway’, the barista had already begun pouring boiling water into a takeaway cup.

I was pretty frustrated at their failure to ask, but at the same time I could hardly blame them. There were so many people rushing through the doors and let’s face it, not many were planning on sitting in. The real frustration I guess, is with the takeaway cup itself.

What is the issue with takeaway cups?

The issue with the disposable coffee cup is all about the plastic lining that keeps your liquids from seeping through the cardboard. For a long time coffee shops placed a recycling symbol on their cups and everyone went about their day assuming the cups would be recycled and all would be well.

There are multiple issues with this notion however, some of which I, like many, were totally unaware of, until now.

First there is the issue of where people discard their coffee cups. As most people drink their coffee on the go, it is likely that it is disposed of whilst out and about, hopefully at least in a street side bin. As there are few street side bins dedicated to the collection of these cups (Manchester are ahead in this game), most will end up in a general waste bin and from here it is straight to landfill where it is unlikely to ever break down. Not only is this a waste of plastic but it is also a waste of the paper in the cups too, all of which can technically be recycled.

Secondly, there are some people who just think its ok to dispose of their cups on the street, or left on a table or a windowsill or any other manner of places. Oh, and not forgetting the people that think an overflowing street bins capacity extends to the floor space around it…seriously!? In all of these cases the most likely destination of said cup is, eventually, our rivers and oceans, where they contribute to the huge crisis of plastic waste that affects not just marine life, but us as well.

Finally, there are the people who might manage to dispose of their cups in a recycling bin…hooray! Right?

Oh no wait….this is where it gets frustrating.

The truth behind coffee cup recycling

Disposable coffee cups are technically recyclable, yes. But there is a reason that coffee shops such as Pret ‘a’ Manger have removed the recycling symbol from their coffee cups, they simply don’t get recycled. The most recent stats suggested just 1 in 400 of those entering recycling bins will ever be recycled.

Why!? I hear you ask

First off is the availability of recycling centres, the last time I checked there were just two recycling facilities in England that had the technology required to separate the materials of the coffee cups, and so provide paper mills with the pulp gathered from the cups.

The issue from here is that the paper mills don’t want this second grade pulp. The fact is that the pulp from disposable cups decreases the grade and therefore the value of the final paper product. As there is no shortage of other resources for paper, with trees forested all over the world for this purpose, the mills see no economic benefit in using the lower grade pulp.

And it is for this reasons that instead of wasting time recycling the cups, they are usually just sent straight to landfill.

How big is the problem, really?

As a result of our obsession for on-the-go coffee, we now find ourselves battling the hordes of plastic takeaway cups that find themselves in our rubbish bins every single day.

For those of you wondering how many that actually is, brace yourselves, because it’s pretty obscene. In the UK alone we go through 8 million disposable coffee cups every single day. That is over 2.5 billion every single year!

Few of these are recycled, most probably end up in landfill and there will be many which, like so much other pieces of waste, journey into our rivers and oceans where they will never truly degrade.

And last, but definitely not least.

What can you do?

If you know you are going out for a cup of tea or coffee and you don’t have a reusable cup, aim to make time to sit inside and ask for your drink in a proper cup. It is a great opportunity to people watch and to take a few minutes to just chill out, isn’t that the point of a cuppa anyway? Just make sure to ask before you order, you are probably in the minority (I have even seen people sit in with takeaway cups) and as such you do have to make the effort to stop the staff in their tracks from carrying out the same old routine.

If you ask and you are told that they don’t have proper cups, take your business elsewhere and let them know why. On my third coffee shop visit of the day that is exactly what I did, I got a bit of a funny look and I’m not sure they cared but they will start to if enough people start to do that!

Tell your friends and the people you know about the problems with plastic cups. Share this blog, share news stories, tell people about how the solutions! The more you talk about it the more people might start to think about changing their habits so spread the word! 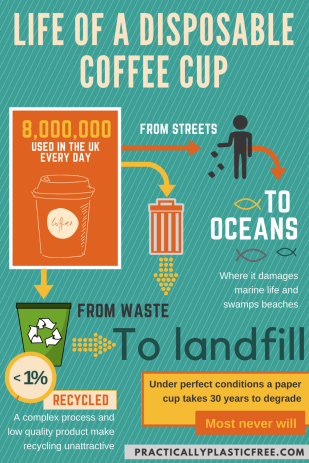 Buy a reusable cup…and then use it! I will be writing a small blog entry on the different options shortly so look out for this!

Ultimately, I also believe that it is up to coffee shops to be doing more to help support the consumer in making the more responsible choice. The conversation should really be coming from them, asking the question “is it to drink in or out?”, offering proper cups and shouting about reusable ones!

Unfortunately most don’t, so if you can pluck up the courage to, make a suggestion to your coffee shop that they do start that conversation and promote alternatives to the disposable coffee cup to every customer they serve. You might be faced with someone who isn’t interested, but you might be surprised! You only need one person to listen for your one voice to reach hundreds or even thousands of customers every day.

In fact, it was just last weekend at the Steppes Travel Beyond Festival that I was absolutely overwhelmed by the energy, positivity and determination of two young girls, who are so appalled at our reliance on single use plastics that at just 11 and 13 years old, they have come up with an ingenious ‘Kids Against Plastic’ campaign.

They are two truly inspiring young girls and one of the solutions they were shouting about during their speech was a scheme they have developed called ‘Plastic Clever’. It is built on the positive idea of awarding local cafes (big or small) with a ‘plastic clever’ certificate, in return for making steps to reduce their plastic footprint. It is a great way to start up a conversation with a local café and they have lots of information on how to go about it on their website.

What are you looking for?